Caliban Arts and Trane Live in association with 918 Bathurst Street Toronto launches The Trane Trilogy Concerts in 3 Parts. Three concerts for each Part. The concerts present the incredible creative and influential works of both local and international recording artists. Please stay tuned and connected for more details on upcoming presentations. Part1/Concert 1 is featuring Emmy-and Juno-Award winning Canadian Jazz pianist/composer D.D. Jackson with the release of his first Jazz CD as leader in over 12 years.

More on D.D. Jackson and launch or “Live at Freedom of Sound”:
Ottawa, Canada-born, New York area- based D.D. Jackson’s new CD “Live at Freedom of Sound” captures a recent solo piano performance that took place at the Montclair-based festival organized by drummer Pheeroan Aklaff’s Seed Artists. “I had actually just gotten off a plane from L.A. after winning an Emmy Award the night before and was definitely tired. However, something that evening just clicked, and the performance became an enjoyable and surprisingly effective representation of where my solo piano playing is today.” 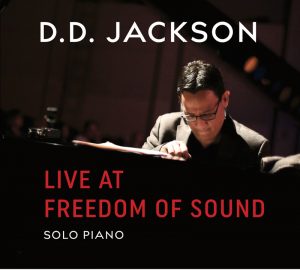 That journey has taken him from a career that’s now included 13 CD’s as leader or co-leader (including two for the major label BMG), performing all over the world with prominent artists ranging from David Murray, Jack De Johnette, and Billy Bang, to MacArthur Genius Grant drummer Dafnis Prieto and James Carter. But why the long gap since his last jazz recording as leader? “The making of my last CD (Serenity Song, 2007 Justin Time Records) was right around the time I began settling down and raising a family, and it was appealing to finally be in one place for extended periods of time instead of constantly on the road touring”, Jackson states. “At the same time, I was also gaining an increasing fascination with technology and began writing more and more for media, which was a perfect gig for a homeward-bound dad.”

Jackson’s work, in fact, culminated in his 2nd Emmy Award as a television composer just this past May (among his 5 total Emmy nominations to date), and he also struck up a regular working relationship with New York-based The Roots on various projects (and appeared on two of their most recent CD’s, participating as arranger, pianist, and producer on different tracks). Jackson has also been passionate about teaching during this period, first as an award-winning professor at Hunter College; at the Harlem School of the Arts (where he taught jazz prodigy Matthew Whitaker and the “The Voice” finalist We’ McDonald, among many); and now at Brooklyn College, where he’s been helping with their new Global Jazz Masters degree and also teaching Media Scoring.

All the while, though, Jackson continued playing and performing. “Live at Freedom of Sound” is a tight set of 5 compositions, ranging from re-imaginings of older material (including “For Don” – originally written by Jackson in tribute to his late mentor, the jazz pianist/composer Don, now re-dedicated to another great influence on Jackson, the late baritone saxophonist Hamiet Bluiett; and “ Richard’s Tune” – a Don Pullen composition Don originally wrote for Muhal Richard Abrams)….