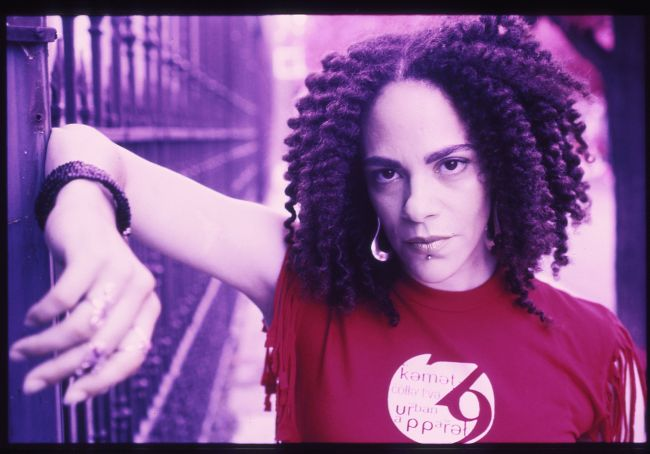 Ursula Rucker is a Philadelphia born poet, mother, activist and recording artist. She has been performing, recording and releasing works for over 20 years. Ursula has traveled and toured extensively, throughout North America, Europe, Asia, Australia, New Zealand and Africa…sharing her poetry…her heart and soul. She is dedicated to art as/for social change…and committed to freedom fighting, truth-telling and peace-(and a little trouble 😉 making through her chosen art form.

Ursula believes in taking her art as far as it can go…whether it be through teaching activism, lecturing, conducting workshops, merging it with music and recording or rocking mics and stages.

To date, Ursula has released five solo albums (Supa Sista, Silver or Lead, ma’at mama, Ruckus Soundsysdom, SHE SAID)…as well as collaborated on over 100 songs, in a wide array of musical genres, with producers/artists from around the world (such as King Britt, Bahamadia, The Roots, 4 Hero, Jazzanova, Louie Vega, Incognito).

Ursula was awarded both the Leeway Foundation’s Art for Change & Transformation Awards. She is the feature of a documentary short called POET. In 2015, she successfully premiered her first one-woman show/live memoir My Father’s Daughter, and is still touring with it.

Most recently, Ursula is most proud of her Monument Lab piece “Logan Squared”, an epic poetic ode to her beloved city Philadelphia…as well as…Voices of Kensington, the poetry series she curates thru the Philadelphia Mural Arts Program…geared towards healing and giving voice to the Kensington community greatly affected by opioid addiction.

Currently, Ursula is working on her 6th solo album, and planning her first book project.

Enjoy Dinner with the Show